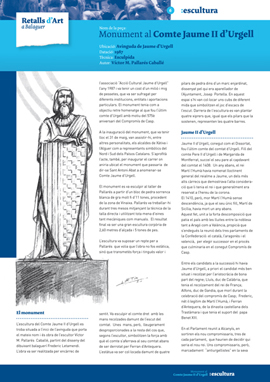 The sculpture of Count James II of Urgell is located at the beginning of the avenue that bears his name and is the work of the sculptor Víctor M. Pallarés Caballé, based on the design of the Balagarian artist Frederic Letamendi.

The work was commissioned by the association “Acció Cultural Jaume d’Urgell” in 1987 and had a cost of one and a half million pesetas, which was paid by various institutions, entities and private contributions. The purpose of the monument was to pay tribute to the last count of Urgell on the occasion of the 575th anniversary of the Caspe Commitment.

At the inauguration of the monument, which took place on May 31, attended, among other personalities, the mayors of Játiva and Alguer as symbolic representatives of the North and South of the Catalan Countries. The event was also used to inaugurate the street where the monument would be located, which would go from being named Sant Antoni Abat to being named Jaume d’Urgell.

The monument was carved in the workshop of Pallarés from a block of white sandstone of very fine grain of 11 tons, from the area of ​​Vinaixa. Pallarés worked for three months using a direct carving technique and using all kinds of tools both mechanical and manual. The final result was a large corporeal sculpture 2.60 meters high and weighing 5 tons.

The sculpture was a challenge for Pallarés, who wanted the work not to be static, but to transmit strength and have value and meaning. He sculpted the count standing with his hands resting on the county shield. The hands are slightly disproportionate to the rest of the body; according to the sculptor, they symbolize the strength with which the count clung to his county before being defeated by Fernando de Antequera.

The statue was placed on four stone pillars within a landscaped frame, designed by the person who was the city council’s rigger, Josep Portella. In this space, cubes of different dimensions were placed that symbolize the squares of the shield. Four cypresses were planted behind the sculpture, which, like the pillars that support it, represent the four bars.

James II of Urgell, known as the Unfortunate, was the last count of the county of Urgell. Son of Count Peter II of Urgell and Margaret of Montferrat, he succeeded his father to the head of the county in 1408. A year earlier, King Martin I the Human had appointed James lieutenant general of the kingdom, one of the highest offices, generally reserved to the heir to the throne, which shows the high consideration in which he had the monarch.

However, in 1410 Martin the Human died without offspring, since his only son, Martin of Sicily, had died a year earlier.

This fact, together with the strong decomposition suffered by the country, with the struggles between nobles that took place in both Aragon and Valencia, led to organize the meeting of the three parliaments of the Confederation: Catalan, Aragonese and Valencian, to choose a successor in the process that would culminate in the well-known Commitment of Caspe.

Among the candidates for succession was James of Urgell, a priori the most well-placed candidate, who had the support of a large part of the kingdom’s aristocracy; Louis, Duke of Calabria, who had the backing of the King of France; Alfonso, Duke of Gandía, who died during the celebration of the Commitment of Caspe; Frederick, illegitimate grandson of Martin the Human, and Fernando de Antequera, of the Castilian dynasty of the Trastámara, who had the support of Pope Benedict XIII.

From the Parliament gathered in Alcañiz came the nine delegates, three for each parliament, who would have to decide who would be the new king. That said, the delegates were mostly marked “anti-urgellists”, and they voted for Fernando de Antequera, who was proclaimed king on June 28, 1412.

The defeated count withdrew to Balaguer, hesitant between opting for rebellion or submitting to the new Castilian king. His mother, Margaret of Montferrat, supporter of the uprising is attributed the famous phrase: “My son, king or nothing.”

There were some manifestations and urgellist uprisings that were quickly put down by the troops of Fernando de Antequera, who entered the city of Balaguer on October 31, 1413. He imprisoned the count, disgrouped his family and gave the castle in payment to his soldiers, who looted it completely.

The count, after being imprisoned in different castles, was definitively imprisoned in 1426 in the castle of Játiva, where he died on June 1, 1433.

Víctor M. Pallarés Caballé, born in Amposta in 1939, moved to Lleida during his first youth, where he took initial studies in the Arts and Crafts School, and then continued in the School of Fine Arts of La Llotja in Barcelona. At the age of 20 he left for Toulouse and then to Paris, where he completed his training at the Superior School of Fine Arts.

Established again in Lleida, he combined purely artistic creations with commissioned works made with marble or stone from the country.

In his extensive work he embraces very different areas: the purely creative, the religious, including the sculpture of the Christ of the Sacred Heart of the Balaguer church, the funerary or the monumental aspect. It should also be highlighted his task as a restorer, especially in the Seu Vella de Lleida.

Since 1963 he has participated in numerous solo and group exhibitions in various Catalan and French cities.

He was part of the artistic group Estudi 76 together with the Balagarian artists M. Bergé, R. Gasol, J.M. Llobet and A. Saiz, a group that sought to revitalize the cultural environment of Balaguer and reflect in their works the social changes that were taking place. They exhibited several times in Balaguer and Lleida between 1978 and 1982.

Author of the abstract: